Awarded 3 Bronze Battle Stars for Campaigns in Central Europe, Rhineland and the Ardennes
(Battle of the Bulge)

During seventeen weeks of intense physical training at Camp Robinson, Little Rock Arkansas, the Army prepared my body for combat. The Army however did not prepare me to endure the mental trauma associated with the horrors of war.

There were no reporters with us in combat. Only the survivors can document what happened. The memories of war remain fresh in my mind to this day. They are vivid and emotionally distressful.

1. During the Battle of the Bulge, beginning December 18, 1944 – our task force of the 7th Armored Division was given orders to set up a defense line at St. Vith – because it was a vital road and rail center. In route to St. Vith, I saw around 25 US tanks that were retreating. Each tank was covered with injured and dead Gis.

We set up a defense line at St. Vith, Belgium, where, for five days we endured relentless mortar shelling. The shells were coming in so close, dirt was coming in on me. Needless to say I was very scared. I asked myself, do I want to get it lying on my back or on my stomach. I was lucky and didn’t get hit. On the 24th of December 1944 we lost our position. 300 men died from our company. Over the course of the war our company lost 950 men killed or badly wounded. Out of our entire company of 350 men, only 25 survived the Bulge. I was the sole survivor in my squad, which received replacements 4 times. We lost so many men we had to call up the cooks to help in the fight. For a week we stopped their best forces, the German SSS and the Wehrmacht, lead by the battle wise von Rundstedt. We were outnumbered. Their 100,000 men to our 17,000.

2. We retreated to a railroad trestle where we decided to go around the town of St. Vith, which was on fire. At about 2 a.m. one morning we broke through the German defense line. We cut a wire fence and waded through waste high water in a ditch. It was foggy, and the temperature was near freezing. What was left of our company walked through the German line. We looked down and saw the Germans sleeping in their fox holes. That was very scary. Some of my close friends who went with me around the town, made a right turn, instead of a left turn. I had seen the map, and I knew they were going the wrong way, but it was too late to stop them. Those men were captured and machine gunned to death in an open field at Manhay Belgium. I witnessed the remains of those slaughtered men when we returned to Manhay, after our division was rebuilt. We recaptured St. Vith.

3. After being surrounded and cut off by German forces we got orders from division headquarters command to rescue the 28th Infantry Division and make a corridor for them to walk through. We did this with 4 tanks and about 40 men. In this operation we took casualties under stressful combat conditions. We successfully freed 8,000 men because of our action. We were being fired on by snipers and at this time an enemy bullet hit the butt of my rifle I was carrying by my side. The bullet lodged in the butt of my rifle. Close Call. Very scary.

4. My first personal encounter with the horror of attending to a seriously wounded soldier came when one of my buddies was shot in the chest. We were trained to “plug the hole” (sinking chest wound), which I did. It was a bloody mess.

5. One night, I was ordered by the company commander to go across the railroad tracks and bring back a certain Sergeant. I found the Sergeant, and two other men in a fox hole. They argued about who was going back with me. As I stepped out of their fox hole, it took a direct hit from a mortar shell and blew me back fifteen feet into another fox hole. I was knocked out. When I came to, I had difficulty breathing, and had ringing in my ears. When I recovered my breath an aerial flare went off, and let me see what happened. The three men I was just talking to, were mangled and dead.

I have a very difficult time describing what happened during the next two hours, where combat was at very close range, an intense fire fight. Only the commander and about 50 men survived.

6. On another occasion a friend of mine walked over to my fox hole. Before he could take cover, he took a direct hit by a mortar shell. I witnessed the explosion that blew his face off.

7. Near Manhay, the air corps was attacking an enemy tank with a 500 pound bomb. The tank was destroyed while it was parked near some houses. I looked in the window of one house near the destroyed tank, and found civilians sitting at their kitchen table – as if they were alive, but they weren’t. The concussion from the bomb had killed them.

8. While riding as a gunner on a half track, an enemy shell hit in front of our vehicle, then another fell behind the vehicle. We know the next shell would be right on us, and it was. I jumped off the half track just in time. Had I not jumped, the shell would have come down directly on my head. Other soldiers on that half track were not so lucky, and were killed or seriously wounded. All our personal belongings were destroyed.

9. I was given demolition training, and was ordered to assist in taking an enemy pill box. (Concrete bunker) My buddy had a flame thrower, and it was my job to blow a hole in the pill box. It was my buddy’s job to stick the flame thrower in the hole, and shoot flames inside the bunker. After we blew the rear door off with TNT, one of our tanks made a direct hit in the opening where the machine gun was firing. I witnessed three Germans who were killed inside the pill box. Several others were able to walk out, but they were torn up badly. We tried to sleep in that pitch black bunker, until one of my buddies was accidentally shot through both ankles. A rifle must have fallen to the floor and discharged. We applied first aid and took him to a rear position for further medical attention.

10. Over a period of eleven days, while fighting a rear guard action, it was very cold – to eleven degrees below zero at night. I was living with little food, and without shelter. I slept on the hard frozen ground. We melted snow in our hands for a drink of water. The ground was too hard to did a fox hole. The bottom half of my overcoat was frozen with ice for five days. Subsequently, my hands and feet became frost bitten. I could have been sent back to England, but I wanted to stay with my men.

11. Another horrible event occurred when one of our fighter planes crashed near our position. It landed upside down, and I witnessed the horror of seeing the pilot with the top half of his head cut off.

12. During one battle campaign, I remember that the ground was slippery from the blood and guts of fallen Gis and Germans. The ground was covered with dead Gis.

13. During the battle of the Bulge, early one morning, five of our tanks were hit by one German tank that was camouflaged with a shed over it. I saw Gis running and heard them screaming, because they were on fire, after they came out of their tanks. (Our tanks were carrying gasoline on the outside of the tanks, which made the situation worse)

14. Once, when we were spear heading, we ran across a company of Germans dug in with six machine guns, and three hundred men. Our task force commander decided we should use infantry to take them out. I was selected to lead the attack, with fifty men. We walked out in front of the field, made a 90 degree turn and went straight at them, and defeated their position. After the attack, one of my men picked up a German rifle by the barrel, and hit it over a fence post. The rifle discharged and this man was shot in the groin.

15. The Last Battle of the Bulge – came near Antwerp where we retreated into a valley. Our forces were on both sides of this valley at the top of each ridge. At the far end of the valley, demolition engineers blew a hole in the road so deep and wide that the German armor would be stopped. We waited for the Germans. What came down the road was a mile and a half of solid armor. Once the German convoy was stopped, all hell broke loose. It was a slaughter – not a pleasant memory.

After the battle, I walked down into the valley to take prisoners. I mentioned to one of my buddies that I needed new boots. He said – there’s a boot over there, but there’s still a foot in it. I didn’t want the boot that bad – it was a horrible sight.

16. There were many encounters with the enemy, too numerous to describe during ten months of continuous combat during and after the Battle of the Bulge. Without a bath for 4 weeks, we were lousy from sleeping in barns. They sprayed us with DDT.

17. I witnessed slave labor camps and a concentration camp. I saw people that were just skin and bones. I saw the crematoriums and piles of bodies, stacked like cords of wood. Horrible! 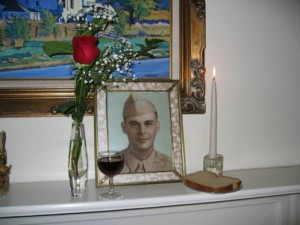 All of the above events, and many more, have caused me emotional distress since the war, over 50 years ago. There hasn’t been a day gone by that I haven’t thought of some horrible war experience. I’ve tried not to think about it – but the images flood my mind. I still think of those brave men I knew, who fought beside me. Those that were injured, maimed and killed. I often wonder why I survived and they did not.

Maybe I survived because I had one secret no one knew about.

I put my trust in God.

(Please share these stories if you wish – especially with history teachers. As my Father said – there were no reporters with them – so his stories are personal historical accounts. You may agree – this man from Edinburg IL, a very small town, is a hero you didn’t know you had. I hope you are as proud of him, as I am… Gerald Jones, son of Chester Grant Jones.)